A lot of folks use isk measures to identify how much you kill and how much you lose. That's one way to do it, but it tends to overvalue low-risk PvP. Things like station ganking, high-sec war deccing, suicide ganking, and covops hotdropping ganks all paint a picture that you're an awesome PvPer... if you look at only isk values.

That said, this blog isn't about high kill/death ratios; it's about helping you become comfortable relying on your wits, staying calm, and making good decisions when you fly. It's the "soft skills" that matter most and best define which of us is "capable" and which isn't.

To cultivate those skills often involves pushing your limits, flying dangerously, and living wholly outside your comfort zone. That's a high-risk/high-reward education experience much more akin to "Step 1: lose 100 frigates" in attitude. Education is expensive.

But that doesn't mean it has to be ruinously expensive. You're going to lose and have to replace ships, but by flying intelligently, you can "lose small", which can help you fund your PvP while cultivating those skills.

Let's face it... the stories that get us all interested in PvP are the Titan kills, the solo pilots who kill a whole fleet, or the counter-drops that catch an enemy by surprise. It's the Asakai's, the B-R's, and the insane fights involving hundreds of thousands of dollar-equivalent space assets, the massive wars, the fall of superpowers. In short, it's all the times when someone "wins big".

Those are the fights that matter most to the gameworld. Only after we become more seasoned do we realize that the truly most satisfying fights for us individually are the smaller stories, the artful maneuvers, the out-flying our opponents, and pulling victories - no mater how small - out of certain defeat. Those small wins can serve as proof that we're learning, improving, and correctly identifying the right action in the right situation.

But, just as important are the times that don't appear on kill reports - the times when you successfully manage to evade destruction. Those are wins in their own right, and while they can often pass unremarked, they're badges of success and growth, too.

In poker, it's often said that the difference between a winning player and a losing player isn't how often they "win big", but rather how often they can "lose small". A losing player will often have the experience where he dumps more and more money into a pot, chasing a draw or hoping for magic on the river. Sometimes, that magic does happen, but on the aggregate it'll cause you to drown.

A smart player will calculate the odds and fold - even with a great amount of money in the pot - if the odds are unfavorable. He'll give up the thought that money already in the pot should somehow count towards his next decision, and realize objectively that the situation has changed and he has to adapt with it.

In Eve, we all go roaming with certain intentions. We want to get a fight, we want to get kills, and we realize we have the initiative by being the aggressor. If we're smart, we have a sense of what kinds of targets we want to fight, and wisely avoid engagements that fall outside of that engagement profile.

But invariably, at some point during the night, we lose that initiative. We're reported in intel, a response fleet with the exact composition to kill you comes into local, or success leads us to begin thinking we're invincible and we start making mistakes. The situation on the ground changes.

When that happens, we lose. If we're lucky, we just lose our ship. If we're particularly unlucky (read: made really bad decisions), we lose our pods as well. And all of that costs isk to replace and time to collect the ship modules in your staging system.

While you'll certainly lose ships, the art of successful PvP depends on reducing those losses as much as possible, to "lose small" as it were. Part of that is keeping your head about you. Part of it is contemplating the possibilities and listening to that voice in your head that tells you something's wrong.

Three times last night, I got myself into some trouble, but managed to think clearly and avoid losses.

It's no secret TISHU has been roaming through the fields of Fade killing any ships we can get our hands on. We've taken about half the sov in Cloud Ring just because - we have no desire for it - and have generally been making life miserable for SMA. That's not all fleet fights, either - they've been able to win some of those - but includes spy activity, awoxing, and corp thefts galore. At at least one point, they shut down recruitment, and they've also tried to purge suspected spies.  Mind you, my nature still holds; I can't bring myself to successfully do this personally, as appealing as it sounds, but my corp mates have been quite entertained by these efforts.

So, naturally, SMA has taken on a lust for killing TISHU pilots, and we're starting to see regular, consistent fleets to contest us. We've become predictable in our visitations, and they're learning that they can make a night out of countering our roamers and campers. The initiative, as it were, is gone, and the pickings have gotten harder to catch recently. In my book, that's excellent news.

I was roaming through Fade in my Sabre last night when I saw a Procurer warp off from my in-gate. I quickly turned around and followed him, a task made quite a bit easier by the new, larger grid sizes. With ships staying visible for longer, it's much easier to track their destination. Thanks, CCP!

With the warp speed changes, I landed just as he did, and we both jumped at the same time. On the other side, I saw 24 in local, with a Procurer nowhere in sight. He was holding his jump cloak. After a few seconds, he finally aligned and I dropped by first bubble. He was on the edge of range, so I burned to him and applied a scram and web. But, I held off on dropping a second bubble. Local was busy, and if relief showed up, I didn't want to bubble myself.

As it turned out, this Procurer well-tanked, and my EMP autocannons were only doing minimal damage. He began to slowboat out of the bubble, but dscan was still clear. A moment later, an interceptor landed on grid - the reinforcements I was concerned about. As I started to align, I started to drift further away, but when I was only 5 km away - still well within scram range - and he was still in high shields, he warped away. That's right... he was warp stabilized.  I was gone a moment later, not waiting to be pointed by the interceptor. Dscan filled up a bit before I left range.

A rookie mistake would have been to put the second bubble up as soon as I closed the distance with the Procurer, but doing so would have actually only resulted in me getting myself killed. Caution was my friend, and helped me avoid a loss.

It was an active night in SMA space, as they had a fleet out entosising all of TISHU's sov. Did I have insight into their intel channels? No; a few systems away, I jumped into their entire fleet - including dictors with bubbles up - sitting on a gate. Getting caught by a gate camp is no fun under any circumstances, but when you're facing dictors, it's even worse - your pod is likely dead as well.

I've had a lot of success escaping gate camps, though. During one particular fight, I kept burning through in my Harpy, back and forth six times until I finally caught the tackle on one side of a gate and was able to escape through the other. But, that was in low-sec, where gate guns were my friend. Fortunately, I had Mr. Cloak, and with a quick tap of my MWD, I was able to burn about 8 km back to the gate while hidden before my momentum gave out. The fleet decided they had bigger fish to fry, and warped off.

Sure, I was lucky they had something better to do, but fitting the cloak made the difference; had I not, I'd have been hunted down for an easy kill, as fleets are never too busy to kill a random pilot they happen to catch. More importantly, it'd have been easy to try to run for it, thinking my cloak could protect me if I pulled some range. But, a non-bonused ship can only do about 40 m/s when cloaked - that's 50 seconds at that speed to just escape decloak range. If they did a thorough search, they'd likely find and decloak me far from the gate, giving me no options but to make a pretty explosion.

And as a result, my Sabre lived to run into more trouble later on.

That came in the form of another Procurer warping to a gate, and me again following him. Strategic mining ops to boost the ADM, perhaps? I certainly hoped so, and followed the Procurer through a gate...

...only to find a dozen Procurers and a Vexor Navy Issue for cover aligning on the other side. My target decloaked and joined them just as the VNI warped off. Shrugging, I took my chance, but did so with a bit of restraint; rather than charging right towards him, strafed the fleet and pointed the nearest one. Sure, it was probably a bad idea, but I came to fight.

They did not panic, but rather one locked me and applied a warp disruptor. Then others started locking me. I was aligned at full burn with an overheated MWD when the drones filled space. I started to panic when my MWD shut off as a scram hit me, but my momentum carried me out of range just as another warp distruptor landed. My shields were gone as I crept 15, 16 km away from the nearest ship. My armor evaporated when I was 22 km away, spamming the warp button. The next volley took me to 50% hull.

And then my velocity bottomed out briefly before flipping to full.  I was away, in warp, at just over 50% hull. Thank God for Mechanics, Hull Upgrades, and the Navigation skills. Rather than being reduced to a wreck, I simply looked like this: 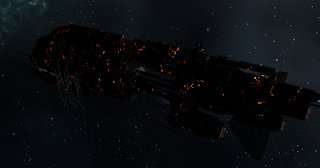 Does that look familiar? It should. I managed to survive; evidently someone else's Proteus wasn't so lucky. The difference is that I flew with an eye to lose small - sacrificing only the opportunity for a kill - while he lost the same, plus his ship.

Sure, I didn't have any kills to show for it, but last night was a huge boost to my confidence and a great step towards overcoming the fear of all the things that solo and small gang PvPers fear: blobs, gate camps, and bait traps. The only way to overcome that uncertainty is to face it and survive it.
Posted by Talvorian Dex at 8:33 PM