Eve is a social game, at its core. At the most basic level, having more people allows you to accomplish bigger goals, like taking down larger targets or completing more difficult missions or sites. Some aspects of the game simply aren't possible without multiple players, like supercap production, incursions, or carrier ratting. Others aren't viable - moon mining and PI are far easier and more profitable with multiple players.

When it comes to PvP, more players always makes it easier. Sometimes, that's not a good thing, like when you're specifically trying to fight outnumbered to stretch yourself. But in some situations and against some enemies, it's prudent and useful.

While most people offer the advice to join a player-run corporation so you have a group of people to talk to in game, that advice is usually offered more to ensure long-term engagement than to occupy each play session. The simple fact is, joining a corporation isn't enough. Nor is it enough to have a certain corp size.

The real factor you should be looking for is how many mains your corp has in the same place.
Read more »
Posted by Talvorian Dex at 3:33 PM No comments:

A Beautiful Thing to Behold

I remember the first time I ever saw a Titan. It was very early in my career as a Roving Guns pilot in Razor. We landed on it in our Drakes (yeah, back then!) and got ready to bridge into a fight.

This was back in the times when bumping titans was a serious problem and FCs would rage for years about knocking it out of the POS. It was in the time of the black screen of death that sometimes happened when you loaded grid. That problem was always made worse by multiple pilots jumping at once, making a titan bridge a serious concern for those of us with lower-end PCs. After any jump, you might have found yourself dropped, only to log back in all alone.

Only a few weeks after seeing that first titan, I participated in my first two Titan kills, an Avatar and an Erebus in Venal, of all places. This was back when Titans weren’t used that often. They were utterly helpless when caught by themselves, and rarely traveled, or were even used that much in combat.

In the interim, though, I’ve participated in a wide number of move ops, but until Citadels, supers and titans had to be parked in POSes, and were often moved on their own, separate from capital and subcap fleets. While I might pass an occasional titan in transit, it was infrequent.

That all changed today, and I've got the evidence to prove it.
Read more »
Posted by Talvorian Dex at 11:02 PM 1 comment:

Don't Ever Try to Sell Capitals

Two days ago, I faced the unenviable discovery that my alliance had changed its priorities, and no one had bothered to tell me. I found myself about two months behind the meta, holding onto ships I didn't need any longer.

Now, this happens all the time, of course. Doctrines change and ships become obsolete. This time, though, the problem was the kind of ships. We weren't talking about a few frigates here.

This is how things typically go when you decommission a doctrine. You somehow get your ship to Jita (typically contracting or hauling it), you repackage it, and sell the components on the market for either whatever you can get, or you set up sell orders to move it at the optimal price, if you don't need the isk quickly. Then, you pick up the new ship and make your way (or ship it) back to your staging.

Of course, there are complications. Maybe you're deployed in deep null with camps along the way, and you need to use a courier service and alliance contracts. Or maybe you want to repurpose the ship and just need a few modules to retrofit it. I've certainly done that more than once. In the latter case, that involves inventorying what you have and what you need. There's nothing more annoying that going through the effort of hauling modules in only to realize you forgot to bring the T2 rig that makes the whole fit work.

But with capitals? It's a giant headache.
Read more »
Posted by Talvorian Dex at 3:59 PM 2 comments:

The Purity of the Throne event has been run for the past seven days. While I missed the first five due to vacation, over the past couple, I’ve been running a few of the sites. 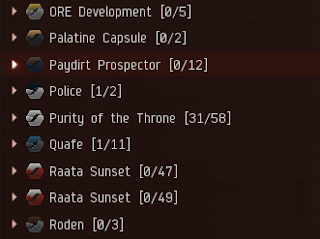 Well, more than a few.

I’m not really a collector of novelty items. Sure, I have a bionic arm on Talvorian, and I injected any freebie skins we received over time. But other than that, I’ve bought exactly one skin, the Police Pursuit Comet Skin. And that one was purchased only because it’s pretty awesome to pull people over in lowsec (ie. kill them) while flying around in a ship painted like a police cruiser.

In fact, generally speaking, I’m offended by CCP’s strategy regarding skins. In my mind, they’re far too expensive for what you receive. I think it’d make more sense (in-game reason) and demonstrate much better customer respect (out-of-game reason) for a skin to be equally applicable to every ship that shares the same hull profile (so, a skin could be useable on Merlins, Hawks, Harpies, and Worms, for instance). I can’t really think of a reason beyond the desire to squeeze every cent out of players for having it the way it is.

Regardless, it’s a moot point, since I’m not really the demographic for skins; I’ll never buy them because they’re far too expensive for me to adopt them regularly. In fact, I rarely even remember to put them on the ships I own them for. I’m just not built that way.

Nonetheless, I’m finding myself intrigued by the Purity of the Throne event. Really, the rewards are more akin to the Operation Frostline rewards – meager and without much inherent value – unlike the Blood Harvest event.

Yet, I’m consumed by this desire for nearly a whole set of Purity skins. As far as I can tell, it’s simply the fact that the white skins look awesome on Amarr ships. With all the other skins I’ve seen (again, with the exception of the Police Pursuit Comet), they’ve really just been variations of color combinations.

But these Purity skins are striking, bold, different. I’m finding myself not only fixated on getting the ones for ships I regularly fly, but even for ships I’ll never sit in. A ? Really? Gotta have it! I may even inject the Aeon and Avatar skins, even though I’ll never fly them with Talvorian.
Read more »
Posted by Talvorian Dex at 10:53 PM 7 comments:

What I'm Missing Most...

Over the past few days, the fam has been on vacation, and my access to anything Eve-related has been limited to the occasional read of Reddit and the odd update of Evanova. Beyond disappointment that my market orders have obviously been bettered (based on a wallet that hasn't been steadily increasing), I really haven't missed Eve that much.

I mean, sure, it's therapeutic to play at the end of the day, and that's not going to change. But, I've been by the beach, getting lots of good sleep, and not worrying about work in the slightest for the past three days. I don't really need pew therapy, do I? It's not really much of a surprise that I'm not missing playing.

But, amid the absence, it occurred to me that I really am missing parts of the game. I feel like I'm missing the story. Between Catiz's coronation coming, the Purity of the Throne events, and the new Scope video, I'm itching to get back and participate in some of the new lore developments.

When I had that thought, I stopped cold. It was immediately followed by another. The things that draw me to Eve are a lot more complex than I (and many people I've talked to) may first believe.

Read more »
Posted by Talvorian Dex at 3:02 PM No comments:

A New Kind of Incentive

In case you're not watching Reddit or the Eve announcements page closely, yesterday CCP announced a series of rewards they’ll be giving to subscribers who remain subscribed between now and the November expansion.

For those who do remain subscribed for this interval (a mere 2-3 months), they’ll receive a Gnosis (hope no one was investing in them…) and a shuttle, and one of the new Society of Conscious Thought destroyers (a guess, based on the available information)

The nature of this giveaway is not random. It’s a deliberate connection to Clone States and what CCP hopes will be an influx of new players through this program.

After all, both the Gnosis and the new destroyer (potentially named the Sunesis, which fits with the naming scheme started by the Gnosis) will be able to be flown by alpha clones.
Read more »
Posted by Talvorian Dex at 8:29 AM 4 comments:

When the Risk is Too Much

Eve is a game about risk, of course. Every time you undock, you risk the destruction of your ship. For that reason, any good mentor will suggest that you shouldn't get too attached to your ships. Save your fits so you can recreate them when they die. Don't covet them. View them as the tools they are, not good friends.

And, try not to think about how many innocent crewmen die when your ship goes boom.

For that reason, everything we do goes into a cost/value analysis. Everyone does this, from the freshest newbro to the most grizzled, cutthroat veteran. Sure, the former may not have as much information feeding into that analysis and the veteran will tell you he flies recklessly even as he very carefully and automatically selects his fights, but they're asking themselves essentially the same question.

What are my chances?

Getting Meta about Clone States

However, most of this buzz is focused around the level of the forest floor, not the wider view.

After all, CCP just announced a big change by allowing players to enter the gameworld without paying. This is a big deal. CCP is treating it like a big deal, with video blogs, a massive winback campaign sent to lapsed accounts, and a PR team working overtime to generate buzz about this change. Clearly, CCP wants people to take note. They’re doing everything they can to represent this as a big deal.

And that suggests a number of consequences.
Read more »
Posted by Talvorian Dex at 10:59 AM 1 comment:

On Friday night, I logged in to comms not really sure what to expect. While RP runs a Friday drunk roam (don’t let the name fool you; most of us are stone-sober, and it’s really a code phrase for low-sec roaming), we haven’t done it the past couple weeks, so I wasn’t sure what was happening.

The first comment I heard was, “X up if you need a Venture.”