The first enterprising souls have gone on Sisi and identified some new ships available for review; the command destroyers (inb4 we call them “commies” or “codies” (CoDes… though I doubt Code will use them). These ships are new T2 destroyer, a class sorely needed to make interdictors feel less alone.

The first thing I noticed was how stupid the name Stork was for a ship. It stretches credibility that they’d name a ship something as un-threatening and docile-sounding as “stork”. Jackdaw… okay, even if they took the name from Assassin’s Creed. Herons and buzzards aren’t threatening birds. I get Eagle, Vulture, Raptor, Vulture, , Raven… they all sound bad-ass. But “stork”? I suppose it’s terrifying to think someone’s going to drop a baby off on your doorstep, but…

The second thought I had was how cool it was that the new ships all focus on delivery, motion, or projection. Pontifex suggests “pontificate”, and projecting opinions. Storks are responsible for babies. Magi project power through magic and mysticism. And the bifrost is the coolest bridge in the history of literature (though, the and Pons Sublicius are pretty awesome, too). It’s a pretty neat naming convention.

The reason for that, of course, is the cool new ability command destroyers are going to have… the ability to serve as a mobile micro jump unit, projecting all ships within its effective radius 100 km in the direction they’re facing. That’s right boys and girls, ALL ships, both friendly and hostile. Need to scatter an enemy logi wing? Just burn directly for the logi anchor and spool up your mobile jump module to scatter them from their fleet.


Bit by bit, CCP is engaging in its war on following anchors and numbers automatically smiting the enemy. And that’s awesome. Oh, and you wanted a counter to ECM? You’re welcome.  I predict these ships are going to become very popular.

But, the real question is whether these ships are going to be capable ships outside of that niche role that, quite frankly, doesn’t serve much value outside of large fleets.  After all, while the command destroyer can dictate when ships are flung away, the target can still control the direction in which he travels.  “You don’t have to go home, but you can’t stay here.”  That won’t be helpful if you want to keep a target tackled.

So, let’s look at the bonuses these ships receive. 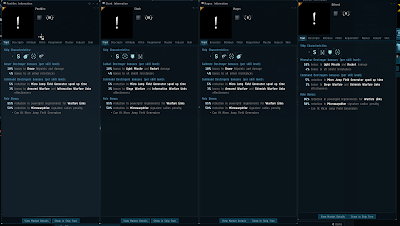 All four of the ships seem to be meant to be kiting ships. Two have a maximum 50% bonus to drone damage and hp.  But, they’re armor ships, and to maintain enough range to stay away from enemy guns, they’ll have to be resist fit with an active tank.  Otherwise, the extra mass of a buffer tank will slow them down too much. The other two ships are your typical shield missile kiters, made more viable by a 50% MWD penalty decrease. You’re supposed to survive long enough under MWD to stay at whichever range you want. 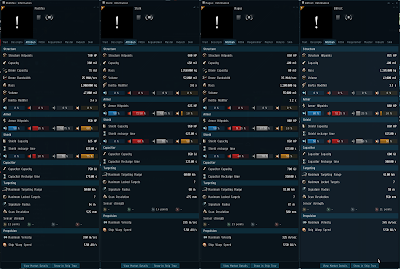 Taking a look at the stats of these ships, there’s a lot to appreciate. The first thing I notice is the resists, which are varied and provide some interesting options for tanking specific damage types.  Fighting lasers? Go with the Bifrost (which is totally awesome… what but a rainbow bridge can deal with the rainbow of laser types?). If you’re facing a kinetic lock – which, by the way, the Stork will be – you should use a Magus. There’s an option for each damage type, making these ships incredibly powerful if you know the enemy you’ll be facing.

And then we have the fitting layout. 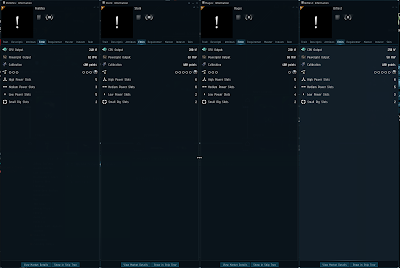 Now, I’m sure these three images will be dissected by people more skilled at fitting than me.  On my part, I’m not a big fan of missile kiting boats. Flying them feels like I’m poking someone with a pin. So, I’ll likely prefer the armor drone ships. In particular, the number of mid slots on Magus offer the change for all sorts of fun. Web, scram, tracking disruptor, and MWD?  Or perhaps dual TD, MWD and point. Lots of mids means lots of fun. I do know that, fit with a web and scram, once a Magus gets within close range and can shut off it’s MWD, it will be tough to hit and dish out some good damage.

I also like the options of having five low power slots on the Pontifex. Perhaps the Worm will have a run for its money as the dominant drone boat. You should be able to fit both a tank and some damage mods that, with a full flight of small drones, can rival the damage of a Worm, along with more survivability. This ship seems to beg for a small ancillary armor repper, EANM, two DDAs, and a DCU with that resist profile.

And, to top it off, if you find yourself losing the fight, just turn on your mobile jump module and send your opponent flying off in another direction so you can escape.