Talk about responsive GMs!  I had done some speculating about the average number of accounts per player after the alt-login issue this past Tuesday, and came up with a number of 1.7 per player.  This number was based on a snapshot, so of course I can’t put any great authority to it, but I found it interesting.  I based the number on how many accounts were logged in immediately after the fix, compared to those logged in beforehand.

In no time flat, CCP Quant put together some statistics to understand how many accounts players maintain (not logged-in numbers, though): 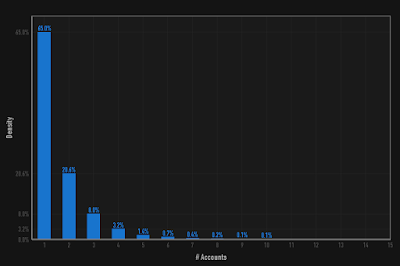 Obviously, the giant story to this graph is the number of players who maintain only one account.  I admit, I’m surprised that 2 out of every 3 players have only one account.  CCP Quant mentioned that the data isn’t absolutely accurate, but if they published these numbers, I imagine they’re somewhat comfortable with the accuracy.  I’m going to have to keep that stat in mind when I write my articles.

Perhaps boosting alts aren’t as big of a problem as we all feared?


Once you step beyond 1 account, things drop off pretty quickly, with the distribution dropping by 60% with each additional account.  While those numbers are interesting, the second chart really brings it home. 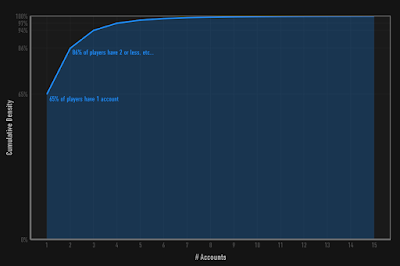 94% of players own three or fewer accounts.  Despite what some of us believe, multiboxing isn’t nearly as common as you’d think, outlying stories to the contrary.

Where the data gets interesting is in its implications.  Even though the average number of accounts is 1.5, the real story isn’t as clear cut as every other player having two accounts.  Those players with four or more accounts – only 6% of the population – are having a very different game experience than everyone else.

But what about the rest of the 94% of players?  They have an average of 1.38 accounts… a significant difference from the 1.5 average for the entire population.  Two out of every five players maintains a second account.  That represents a lot of opportunity for growth, doesn’t it?

Edit: And one last chart... Orson Brawl asked about changes over time.  As you can see, the accounts per player hasn't really changed much, but I'm uncertain whether the data Quant provided is of active accounts or overall accounts (I assume active, as folks tend to make trial accounts that then die out, which would heavily inflate these numbers). 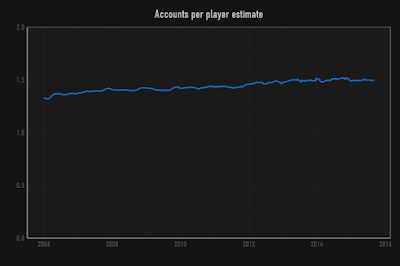 I’d love to see similar data for logged-in counts, but I’m grateful for the info!  Very interesting!
Posted by Unknown at 9:18 PM